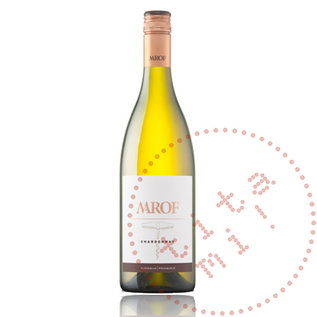 Chardonnay is made from the Chardonnay grape and is a full-bodied and creamy white wine. This Marof Chardonnay wine has a fine taste with aromas of apple, lime, some caramel and a little flint. 15% of the Marof Chardonnay has been built on new French oak, which is why the Marof reminds me of Burgundy. The winery Marof makes honest wine in the vineyard and wine that reflects the terroir in a classic wine style. Furthermore, the wine is often not completely filtered, which benefits the wine aromas. The Marof Chardonnay is best with seafood, fish, pork, chicken, salads and all kinds of vegetarian dishes. The Marof winery is located in the wine country of Slovenia. The name Marof actually means Meierhof in German. In 1905, the winery was built on the land of the Hungarian Szapary family and served as a hunting lodge. From 1922 the castle has been used as a wine house, also thanks to a large wine cellar. The Marof winery is located in the middle of the most beautiful vineyards in Slovenia. The Marof winery is a real family business, with the son and oenologist of the Marof wine family: Uros Valcl as winemaker. Uros has already won many wine awards with the Marof wines. It is Marof's vision to let nature provide the high quality of wines and to get the most out of the wine with the latest wine techniques.